This is easily one of my favourite posts to write, because this one of the most surreal experiences I have had since travelling around Europe. Whilst planning my trip, I was fortunate enough to be invited on an Electric Bike Tour around Rome with The Roman Guy. I couldn’t email quick enough, I visited The Vatican with them last year and this time I would be cycling around the city seeing some hidden gems.
In one word. Magical. That is the only way I can explain what it feels like to cycle around the Colosseum and Trastevere, to name a few. I seriously recommend this tour whether you are in Rome for a week, or a few days because you get to see a lot in a few hours. I am not the best cyclist and the cobbly streets challenged me, but thanks to my AMAZING tour guide, Dimitri and the push of the electric bike, I had the best experience ever. Read more to find out…. 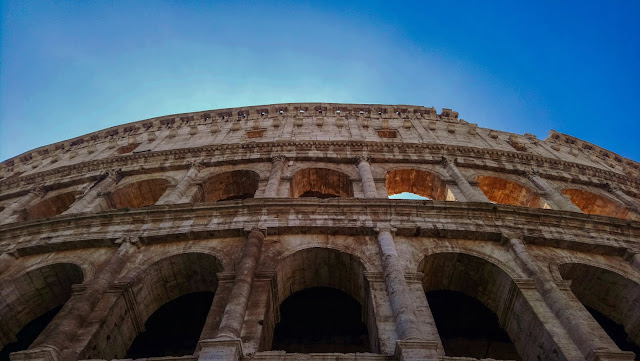 Why a Bike Tour?
So, I was lucky enough to have a few choices for my trip to Rome and, not going to lie it was very difficult. I had already been inside the Colosseum (another tour choice) and there were so many places I hadn’t been yet in Rome so the Bike Tour seemed like the perfect fit. I also wasn’t expecting to meet my Paolo on a Vespa so this was the closest I could get to my Lizzie McGuire moment! Also… what a difference compared to a normal walking tour (which I also love).
I am also a bit of a scaredy cat, within reason, so I wanted to push myself to do something I never would have done before. Now I can say “I have ridden around the Colosseum on a bike” … how cool is that and the sight will never get out of my mind.
Back with The Roman Guy
As I said previously, I visited The Vatican with The Roman Guy last year and loved it. There were really nice sized groups, so much knowledge and the nicest staff. That didn’t change this time and I was so happy to be working with The Roman Guy again, I always enjoy my time.
Using local guides and having so many different types of tours about, this is the company to book with and they just launched in Paris too.
The Bike Tour
The meeting point was at a bike rental shop at Circo Massimo, already a pretty spectacular meeting point. Really easy to get to by metro but also by taxi and taxis are really cheap here too. The day I chose for my bike tour was the day of the Rome Marathon so the taxi stopped as close as possible but that didn’t affect the tour anyway. There was meant to be about 8 of us on the tour, but I am guessing reasons due to the Marathon I was the only person that turned up. Plus every other day was fully booked! To be honest, I did not complain about being the only one because we got to spend more time at monuments and I got to go see other cool places because there was more time.
I then met my tour guide Dimitri, the nicest guy ever and was so helpful with setting up my bike and showing me how to use it. Okay, I will admit the practice run wasn’t so smooth. My family ride bikes, I don’t at all. I can ride a bike but I am not a professional, so you won’t see me on the velodrome. After a few practices I got the hang of it. Plus, I was so gutted because for some reason this time around, the heat drained my phone so not as many photos… sad Molly. But, for next time I have a portable charger! Here are my highlights… 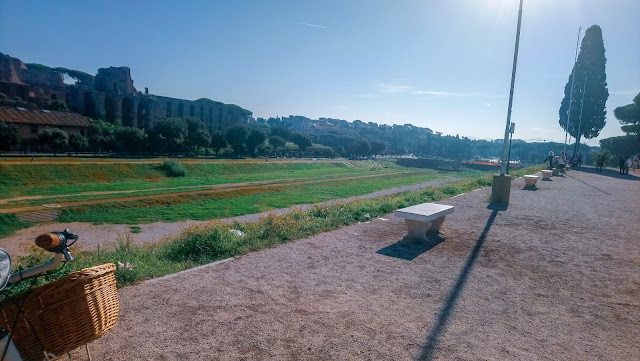 , after a tough 20 seconds of cycling (joking but it was first time I rode a bike in years) our first stop was Circo Massimo. Which I didn’t know was the biggest mass entertainment venue in ancient Rome, bigger than the Colosseum. When Dimitri asked where it was, I presumed the picture above but just in ruin? WRONG. It was below my feet. It held over 250,000 people…. how is that even possible, yet at the same time how amazing. Dating back to 4BC, Chariot races were held here and was rebuilt after a fire in AD 64. I love how nothing is untouched in Rome, which makes it one of the most unique places in the Rome. 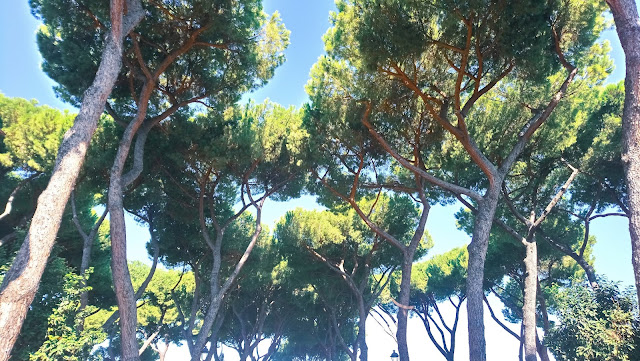 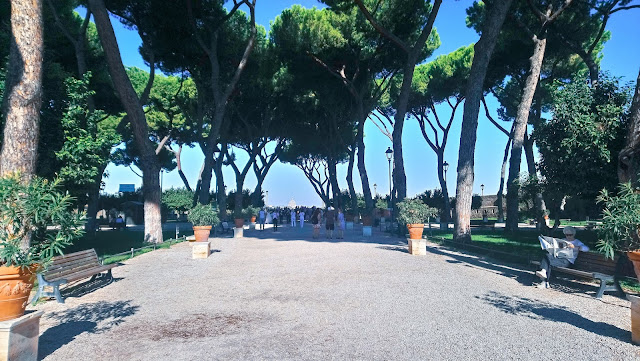 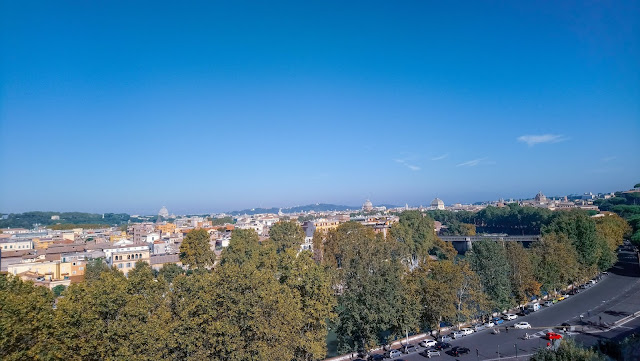 The thought of cycling uphill after Circo Massimo, scared me until I had a little help from the Electric Bike. The Orange Gardens was up next, right after the Keyhole. There is a little Keyhole and if you look through it you get a viewpoint of the Vatican. Unfortunately, my phone camera couldn’t take a photo…which is good… because now you have to see it for yourself!
The Orange Gardens is one of the most peaceful and one of my favourite parts of Rome. It also has a fab view of the city as you can tell from my photo. It was so busy I had to reach my arms up and trust my photo skills… I was impressed. Dimitri also taught me how to drink like an Italian out of one of the small water fountains … to find out book a tour and ask Dimitri! 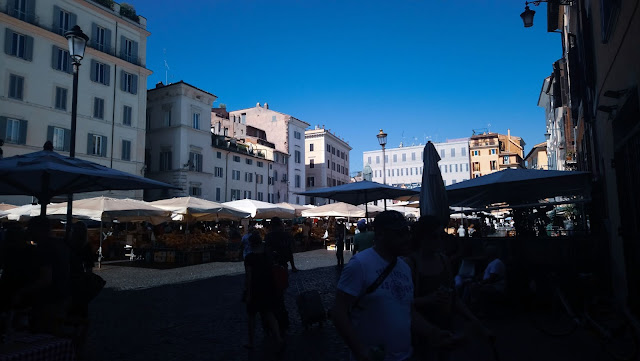 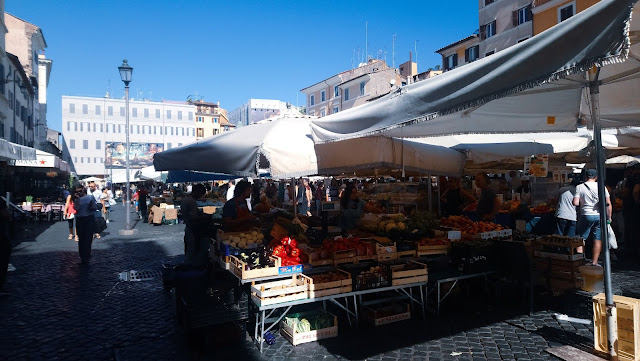 Rome is one of those places where it is massive and everything seems far away but somehow it isn’t. So I didn’t get to see Campo Di Fiori on my last trip, and doing a Bike Tour made it seem like it was only around the corner from other places I was in. It was set in a piazza (the only one in Rome with no church) filled with local produce including pasta (of all colours) and clothing.
There is also a lot of history here too, in the middle of the square is a statue (not in photos). It is the statue of Giordano Bruno, who was executed by the Inquisition and years later received recognition. In the end, Pope Leo XIII Published a document and the Freemasons (support group) erected a statue of Giordano as he is seen as a humanist martyr and his execution was recognised as an error. Dimitri explained it much better but I thought I would add it in as a fact! 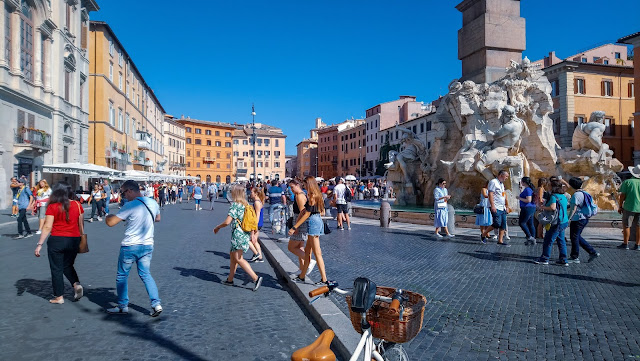 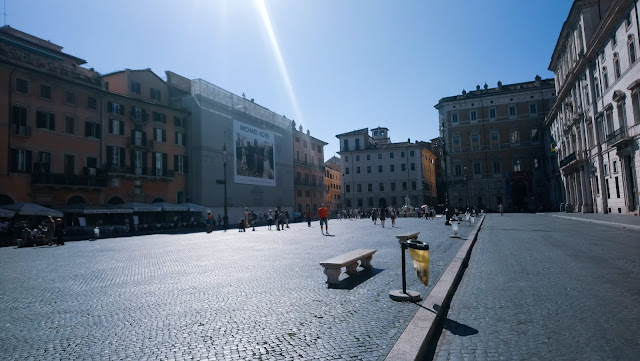 Myself and Dimitri share the same opinion of Piazza Navona, as it being the most beautiful Piazza’s in all of Italy. It is just so spacious and there are restaurants surrounding the edge with a view of the mountain, statue and musicians.  I think because it is so spacious, there seems less people so you can enjoy it more by spending more time there.
Dimitri also shared some facts regarding art and architecture of the Piazza… I didn’t realise how much art there was in the city. The Baroque Architecture was from a rivalry with Bernini vs. Borromini. The climax and pinnacle of their rivalry is this Piazza, Bernini’s fountain with 4 statues representing rivers with one raising it’s hands shielding himself from Sant’Agnese Church . The Church was built by Borromini, Bernini often overshadowed his rival. 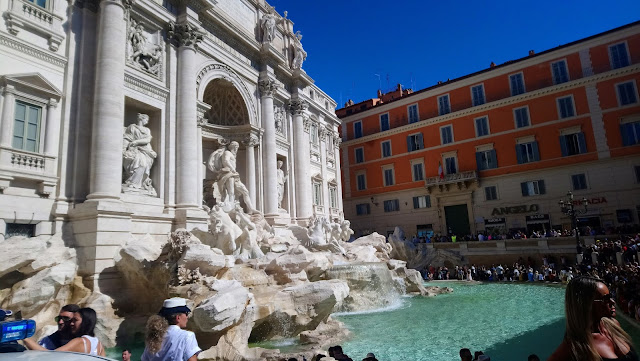 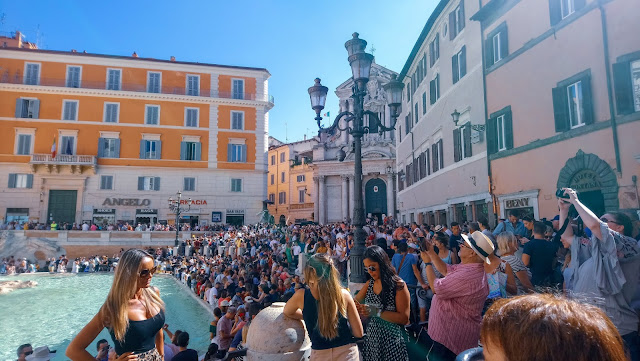 Wow…. the Trevi Fountain was way busier than when I visited last April. Plus, it was the only time that I visited this time where it was filled with water. I have already thrown coins in the fountain but was amazing to see it’s beauty again. I also had to get a shot of the crazy amount of people because it shows the reality of visiting this city during the busy season.
Also, a lady decided to take a step into the fountain to take a photo. I mean, as a general rule and common sense, why? Luckily, a police guard was on guard to whistle to get her attention. It was a hot day but that was a step too far! It may be Autumn in England but my goodness was not expecting it to be 28 degrees Celsius in Rome!

The perfect way to end my tour was by cycling up to the Colosseum and again by cycling around it. Why walk when you can cycle? There is something extra special about it. To get this epic shot, Dimitri took me right to the side of it. I have already been inside the Colosseum but he still told me some great facts about the landmark. Especially in regards to the maintenance of it. He said how a lot of the monuments need help to restore it, so because it is so expensive fashion brands like Armani etc… will sponsor it and help restore it.
We also got to go through how a lot of companies want to restore the centre to be able to put on Gladiator style performances. To me it seems a bit like a mockery to the actual historic events that took places. Including gladiator fights, executions and animal fights. I think leave it, it is an iconic part of the world and it a major part of Rome.
————————————-
I must say, the whole entire time I was laughing at myself at the thought of watching me riding this bike. The cobbled streets made me so nervous but it was fine, Dimitri helped me out a lot and stayed at my pace. I was super proud of myself for pushing my boundaries and I got to see a lot of amazing places. It was one of those moments where you just think, how is this my life right now and I am so grateful for the opportunity. 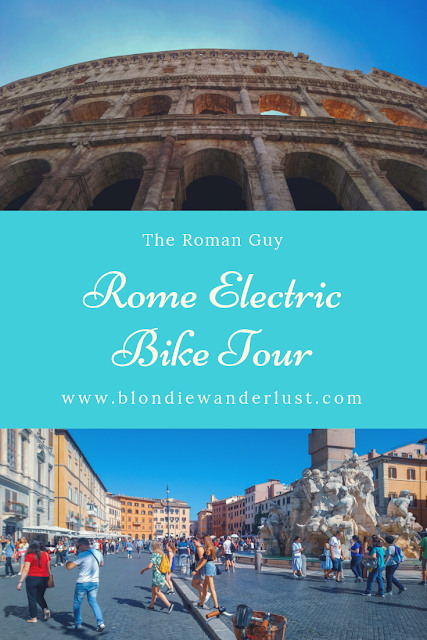 Although this tour was given free as a collaboration, all opinions of mine are completely true and my honest opinion. From this experience and my Vatican experience, I don’t think there are any other positive words I can say about The Roman Guy because they have all been used. If you want to get the most out of your Italian trip, please just check out their website and go on a tour. It made my trip and will not be forgetting it ever. Thank you The Roman Guy… truly amazing. Okay, I am signing off because otherwise I will cry. Those 10 days away changed it all for me, soon you will find out why.
Mol xo

Any cookies that may not be particularly necessary for the website to function and is used specifically to collect user personal data via analytics, ads, other embedded contents are termed as non-necessary cookies. It is mandatory to procure user consent prior to running these cookies on your website.